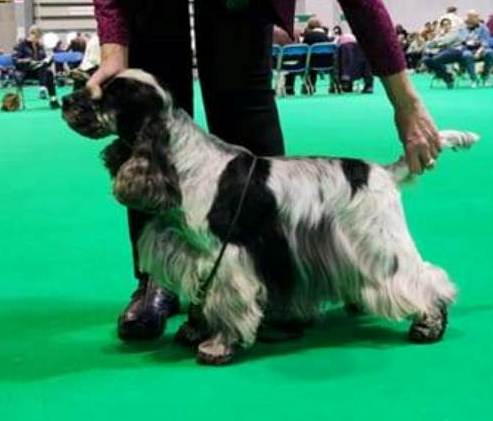 THE ONE AND ONLY

His mother and siblings!

Already has that cheeky glint in his eye 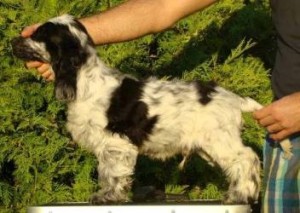 Age 12 weeks – My first time seeing Cromby at his home in Budapest.

Having been without any roans for many years I decided it was time to try them again, as I often judge overseas I was able to start my search for just what I wanted, after 2 years I saw the lovely black/white lady Multi Champion: White Maple Cross First Swallow, she was just my type of girl. I waited patiently in the hope that one day she would be mated to a dog that I liked with a pedigree I could work with. Eventually up popped some photos of a litter she had produced, hardly daring to ask who the sire was I was so happy to be told he was an old favourite of mine called Lynwater Spinning Top, I knew he carried the old traditional lines that I like to work with.

As soon as it was possible I was flying out to see the litter. I was welcomed in to Peters home and offered my choice of the puppies, how lucky was I ? … in the lovely sunshine in a beautiful garden out ran what was to become my one and only Cromby !! From a superb litter of top quality puppies I only had eyes for him, when he gave me “That look” it was all over, I picked him up and it was love at first lick. I watched all the litter moving and then standing, I was spoilt for choice, the girls and the boys strutting across the lawn, tails going non stop, but my eyes were only for Cromby, he already had that “I dare you” look in his eyes, he was obviously full of devilment and I knew he was going to be hard work from day one, his joy of life was evident immediately.

I came home very happy and he arrived shortly after, from his first day here he has ran me ragged, such a happy lad without a care in the world, I love him for his naughtiness, even though he exhausts me every time I show him, one day he may calm down and even decide to stand still for more than a few seconds, but if not …

What a star he has been since his first show, winning at every level, who could ask for more.

His journey so far !

Best Opposite Sex in show at West of England cocker

Cromby won well over 40 classes, during his 2½ years in the ring, winning many BOB, Groups etc. I retired him early to take a back seat to his son Ziggy, my first ever orange roan. Ziggy very quickly gained his title Sh. Ch. Claramand Ziggy Ziggy, JW ShCM.

Cromby returned to the ring as a Veteran attending an occasional club Championship Show. The icing on the cake was when he attended Crufts for the first time as a Veteran … boy did he show his socks of, in a top quality class, he powered around the ring with his outgoing, happy nature, his ever wagging tail and proved to all of his many admirers that he was still the one to beat. His children, grandchildren and related progeny are winning at every level. I am, and always will be, so very proud of this boy, my Cromby. He really is “The One And Only”.