Tissues At The Ready 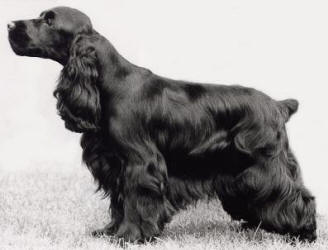 “Her place on my bed is now cold. But her place in my heart will always be warm”

The phone call that everyone who breeds and shows dogs dreads to receive is the one that tells you that one of your dogs, that you have just placed in a pet home, has gone missing. The day I had that dreaded call my world stood still and I shall never forget the feeling of despondency that swept over me. Where do you start?

First of all you phone everyone you can and ask them to help you, all the time trying not to cry and not to imagine the worst. It is freezing cold outside so you put on boots and coats and set off to the place the dog was last seen. The dog in this case is called Beryl. You think it will be alright, she will appear at any moment and all will be well. After walking for miles, hour after hour, you know that it is not going to be that easy. When it gets dark you start to cry, you feel completely useless. Why your dog?. She does not deserve to go through this, its not fair. All you keep doing is imagining the dogs fear and distress. You have to go home, it is too dark to see and everyone is cold.

All night the feeling of despair gets worse. Up at daybreak and out you go to cover the same area then further and further. Back home again and I phone the Police, local Army Camp and Radio Station, the Dog Warden, local Kennels and so on until you have covered every angle. Out again, stopping cars and lorries, knocking on farm doors and every house you see. Another day ends, more tears, how can she just disappear? Where is she?. Desperation sets in, the weather gets worse. Please let me find her. Six days and nights of constant searching by everyone and not a sign. By now I am on the verge of a nervous breakdown, I cannot do anything but cry, something has to happen soon.

I have made posters to put up, they are everywhere, the cattle market, every pub for miles, all over every wood, at crossroads, on fences, everywhere. We have made huge billboards and placed them alongside the major roads in the area. Please, Please, someone see her, I cannot stand much more. That night it snowed. That’s it I thought, she cannot last much longer. The phone rings something black has been spotted by Police going across a field about three miles away. I quickly phone everyone, “hurry” “hurry” “hurry”. They all come around straight away, off we go in all directions over field after field, nothing. I knock on every door I can see, by now I am blue with cold and my clothes are torn where I have climbed fences and fallen into ditches. I must look like a mad woman!! One more house in the distance, off I go. Yes, he thinks his brother had seen a dog about an hour ago right back in the area we had been searching.

Back to the car and drive around frantically looking, staring into the blizzard. I see the others and tell them that she has been seen, they go one way, I go the other. I park near the gate next to the wood I climb the gate absolutely exhausted hardly able to put one foot in front of the other, my voice almost gone from consent calling. It is so cold my face is blue, my toes are numb, please Beryl, please don’t be dead, I cannot stand it, please let me find you. How could you be alive after all this time in these conditions? How can life be so cruel to let a defenceless animal suffer like this, it’s not fair. I look down can that be footsteps in the snow?

It is, I know it is, they cannot be fox prints can they? Run Elaine, run. I keep tracking across brooks, through the woods, down hills, more woods and on and on. I think I am going to collapse, I cannot get my breath, it must be her, please let it be her. Tears are running down my face, freezing to my skin, where is she? I look up and almost bump into my daughter and her boyfriend. They also had seen footsteps in the snow about three miles away and they had also been tracking them.

Whatever we were tracking had covered a huge area and must be back tracking. We set off in different directions. I follow the trail round and round until it disappears into a wood. I walk into a clearing, I cannot give up, I must not give up. How quiet it is, the snow has killed every sound and probably my lovely dog too. Was that a twig breaking? It must be my daughter. I turn around and there coming out of the wood on her tummy, hardly able to stand is Beryl. Her eyes are glazed, she is on the verge of collapse. Careful now, she sees me, I get down on my knees sinking into the snow, gently I call her name Beryl, Beryl, Beryl, her head turns towards me, she stops, goes down in the snow, please don’t die now, please. She looks at me I cannot bear the look of desperation on her face. Beryl come to mummy, come on baby. A second maybe two and with every last ounce of her strength she runs into my arms.

Thank you God, thank you. Quickly off with my coat, I cannot feel the cold anymore, wrap her up, she is so cold and thin, I talk to her gently over and over, the tension going out of her body, I watch her look at me with those beautiful, thankful eyes. I hug her to me and I go screaming and shouting through the woods. I have her, I have her, I have her. Hooray, here she is, here she is. My daughter and her boyfriend come rushing out of the woods, screaming and shouting. We all hug each other and Beryl and run around like idiots, crying our eyes out. Back to the car, lets get her home and into a nice warm bath. I give her tiny amounts of food and I watch her come back to life. That night we had champagne and phoned everyone to tell them the good news. It was a fantastic feeling after so much heartache.

Beryl slowly recovered from her ordeal and so did I. She did not go back to her pet home, I could not bear to let her out of my sight for one minute. She now sleeps on my bed each night and that’s were she will stay for the rest of her days.

After several weeks of convalescence I took Beryl to the vets to have her teeth cleaned and any bad ones removed. She had to have quite a few out which really surprised me as she had never had any trouble with them, however I thought it was just one of those things and life carried on as before. Shortly after this I noticed Beryl looked a bit under the weather I could not put my finger on it but she just did not look right. After a while she started to be incontinent at night time, and then she kept sneezing with large amounts of blood coming from her nose. I took her to the vets again and they did some x-rays and took biopsies from her nose.

When the results came back they did not show any irregularities, the vet decided to put her on a course of steroids and antibiotics to see what if anything they would do. There was no change in her at all and so she was put on a higher dose. We carried on like this for several months without any change at all. In the mean time Beryl started to get ulcers in her mouth and problems with her ears. I started to think that she was just getting old very quick and perhaps she was not going to live to be an old dog. The incontinence had returned and her mouth started to smell bad, strangely her sneezing stopped. Now she was losing weight and I was getting worried.

I took her back to the vet and asked him to look at her teeth again although it had only been about ten months since he last treated them. When I picked her up she was still very sleepy which is quite normal after an anaesthetic. When the vet told me he had taken another six teeth out I could not believe it.

She slept on my bed as usual and the next morning she still seamed very sleepy. By the afternoon I knew something was very wrong. I rushed her back to the vet and she was put straight onto a drip. She was now unconscious. All I kept thinking was how could this poor dog have gone through so much to have ended up like this? Life was really not fair. After several hours Beryl started to rally round slightly and the vet was able to take samples of blood to analyze and test.

It was touch and go for several days but when the tests were completed the vet was amazed to find that Beryl had a quite rare condition called Addison’s disease. Immediately the correct treatment was started and Beryl started to improve slowly but surely and I was able to start sleeping having had hardly any for the past week. Finally she was taken of the drip and allowed home she was now stable and although she would never be able to come of medication at least she would have some quality of life.

As the months passed Beryl regained her weight the sneezing did not return except on very rare occasions and she was never incontinent again. Unfortunately she would always have niggling little problems that would not respond to treatment, like her mouth ulcers, and the vet told me that she would not live to be an old dog but while she was able to stay in a stable condition on her tablets not to worry.

And so it looked as if poor Beryl would always be bordering on the edge of ill health but together we would fight and when her time has come to an end at least she will have had every chance at a happy life. I know when she snuggles up to me in bed and looks at me with those beautiful trusting eyes that I will never give up trying to keep her as well as possible.

Time passed and to every ones surprise Beryl improved a great deal and thankfully had many years enjoying her life, my vet was amazed that she lived a further 7 years mostly in very good health, she always lived up to her name and I still talk to her when ever I am in the garden near to her resting place.